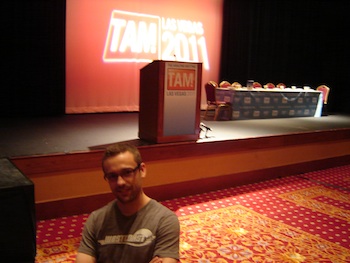 Now that I am back in Vancouver, it feels like my experience at TAM was nothing more than a dream… At least I have proof it wasn’t! I have to admit, the last day was not the most exciting, but interesting nevertheless.

The day started with short presentations from people who submitted their candidate topics upon arrival at TAM. I only saw the last three, and it was funny that the last two appeared to be antithetical. Well, they weren’t really, but that’s another subtlety that nobody in the skeptical crowd seems to get. The first guy advocated being nice and genuinely interested in the other’s point of view during an argument, while the women that followed argued about sending a dramatic and unambiguous message in order to get the point across. The thing that nobody gets is that these are both valid strategies, but in different contexts. One applies when meeting a believer in woo-hoo at the bar, while the other applies when making public statements. Guess which one is which.

The first talk, by Susana Martinez-Conde and Stephen Macknik, was about optical illusions and what they teach us about how the brain operates. They showed the now famous “count the number of passes in the white team” experiment. For me, there was nothing new there.

Much more new and interesting was Sara E. Mayhew‘s talk, about the role of popular media in spreading the ideas of skepticism. She mentions how powerful identification with a character can be, especially in younger people. She contrasted The Lord of the Rings, Star Wars, and Twilight, in which there are no skeptical values at all (even a few backwards values if you ask) with Harry Potter, in which you can find several obviously skeptical quotes. You may have picked up if you read my blog that I really dig freethinking pop culture, whether it is in movies, TV shows or even music. I was really glad she brought it up, because nobody else did.

Then, there was a panel about communicating skepticism featuring PZ Myers, Eugenie Scott, Carol Tavris, Jamy Ian Swiss and Phil Plait. I will let you guess what this was all about. Despite all the apparent tension between Phil and PZ over the “Don’t be a dick” talk, these guys have no resentment whatsoever, and they obviously like to joke about it.

Then, Desiree Schell told us about what skeptics can learn form other social causes. It was mostly about motivating the troops into getting involved into a very specific fight, like going against your local schoolboard who want to bring back creationism in the classrooms. Interesting, but once again, nothing really new to me.

The morning session was concluded by Steven Novella, and he decided to tackle a rather unusual topic: mental illness denial. If you read The Psychopath Test by Jon Ronson, you will know that there is an ongoing war between the Scientologists and the psychiatrists. That was a good talk, but after reading Ronson’s book, there was no surprise for me there.

Then, there was a panel on diversity in skepticism featuring Greta Christina, D.J. Grothe, Debbie Goddard, Jamila Bey and Hemant Mehta. The discussion ended up revolving not around diversity of skin color, cultural background, sexual orientation, or any of the other classic diversity spectrums, but around the diversity of views among skeptics. There was a bit of “how do you herd cats?” (answer: TAM), but there was also a lot of how do you make someone who is not skeptical about the exact same things as you are feel welcome in the movement? It is a very legitimate question with no simple answers. The conclusion seemed to be that on the local level, you can be as specific as you like, since local occurrences of woo-hoo are going to be specific, but on the national level, it is much more complicated. I got to meet D.J. Grothe, the president of JREF, a bit later and I got to ask him: what about the international level? How can we bring skeptics from around the world together, and possibly fight for causes that necessitate global mobilization? He answered that they are working towards building ties with other countries, and that they are making huge progress with Australia, the UK and Canada. I am looking forward to the day when they will reach out to non-english countries as well.

Then, Jennifer Ouellette gave a nice talk about how reality turns out to be so much more that what we thought it was thousands of years ago. She focused on Ptolemy’s music of the spheres, and showed how there really is a music of the spheres, but it is not what we expected. She played the famous sound clip from Saturn, “recorded” by the Cassini spacecraft. I really suggest you look up exactly how they got that sound (“But, there’s no sound in space!” I can hear you say), it is fascinating.

Sean Faircloth finished the conference by giving a very political speech about his plan to take back America from the hands of the theocrats. That was a very good speech, and I never heard a politician addressing skeptics like that before. He represents the Secular Coalition for America, and he really is involved in politics. If he manages to do what he plans to do, I don’t fear much for the future of our cousins from the south. We need some organization like that in Canada as well, and there’s a good example to follow in Sean Faircloth.

There were a few other things afterwards, a few workshops and an attempt at making a live Million Dollar Challenge, but there isn’t much to say about these. The Million Dollar Challenge could not take place because all the applicants couldn’t figure out how to apply correctly, despite the fact that it is fairly simple. Banachek and Jamy Ian Swiss still managed to turn the evening into an entertaining event, debunking a bunch of videos of supposedly paranormal feats that were sent for the challenge.

All in all, a wonderful conference that makes you think a lot. It’s too bad it’s so expensive. I will try to get across to D.J. Grothe the idea of a student TAM. After the end of the conference, I was having a nice conversation with another attendee I met the day before, and we were approached by a student journalist, and we came up with that idea. Why not organize TAM on a college campus instead of in a fancy hotel in Vegas? Why not make TAM happen on a different campus every year? That would diversify the attendance for sure!

This entry was posted in TAM 9. Bookmark the permalink.